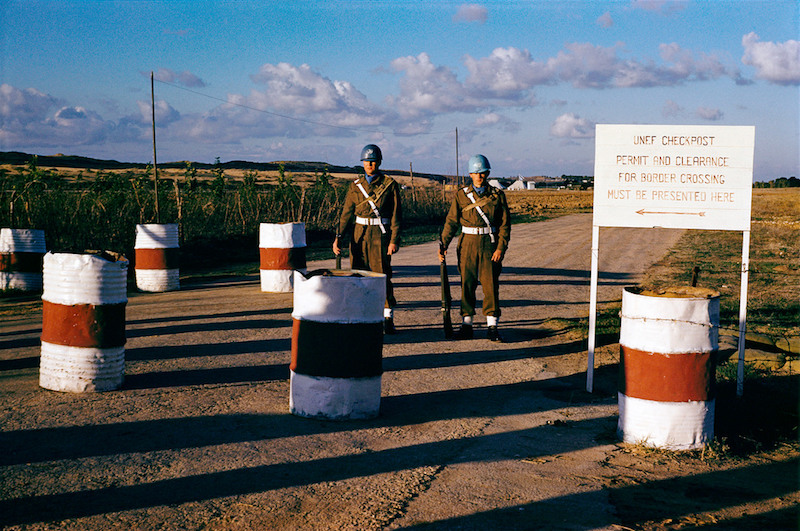 In 1957, Yul Brynner starred in The Journey, a movie about the Hungarian Revolution directed by Anatole Litvak. Filmed in Austria, the actors included a group of refugees, displaced from their homes during the Revolution, cast as extras. Magnum photographers Inge Morath and Ernst Haas, Austrian natives who had worked together in Vienna during the early post-war years, were assigned to the set, and Morath—always drawn to the mise en scène—made a series of compelling portraits of the refugee actors. Brynner later wrote that the film marked his first real encounter with refugees.

Two years later, the United Nations declared 1959 World Refugee Year, and Brynner was recruited as Special Consultant to UN High Commissioner for Refugees “to assist in efforts to bring to the attention of people all over the world the problems of refugees and the possibilities for their solution.” A serious photographer himself—his pictures were distributed by Magnum Photos—Brynner invited Inge Morath to travel with him to refugee camps in Europe and the Middle East.

In 1960, they published Bring Forth The Children, a photographic report on the plight of refugee children. They also collaborated on a related exhibition, and Morath published a story under her own byline in the periodical DU.

For Morath, the commission would have been especially poignant. A university student in Berlin during the Second World War, when Morath declined to join the National Socialist student organization she was drafted for factory service, where she worked alongside prisoners of war. When the factory she had been assigned to was bombed, Morath joined the masses of refugees made homeless by the war, and she returned to Austria on foot. Many years later, at Magnum Photos, Morath refused to photograph war, preferring to work on stories that expose its dire consequences.

This small selection of photographs represents the preliminary work towards a forthcoming project of the Inge Morath Foundation, in cooperation with Magnum Photos, the Estate of Yul Brynner, and Steidl. The accompanying captions are by Inge Morath and Yul Brynner, from Bring Forth the Children.