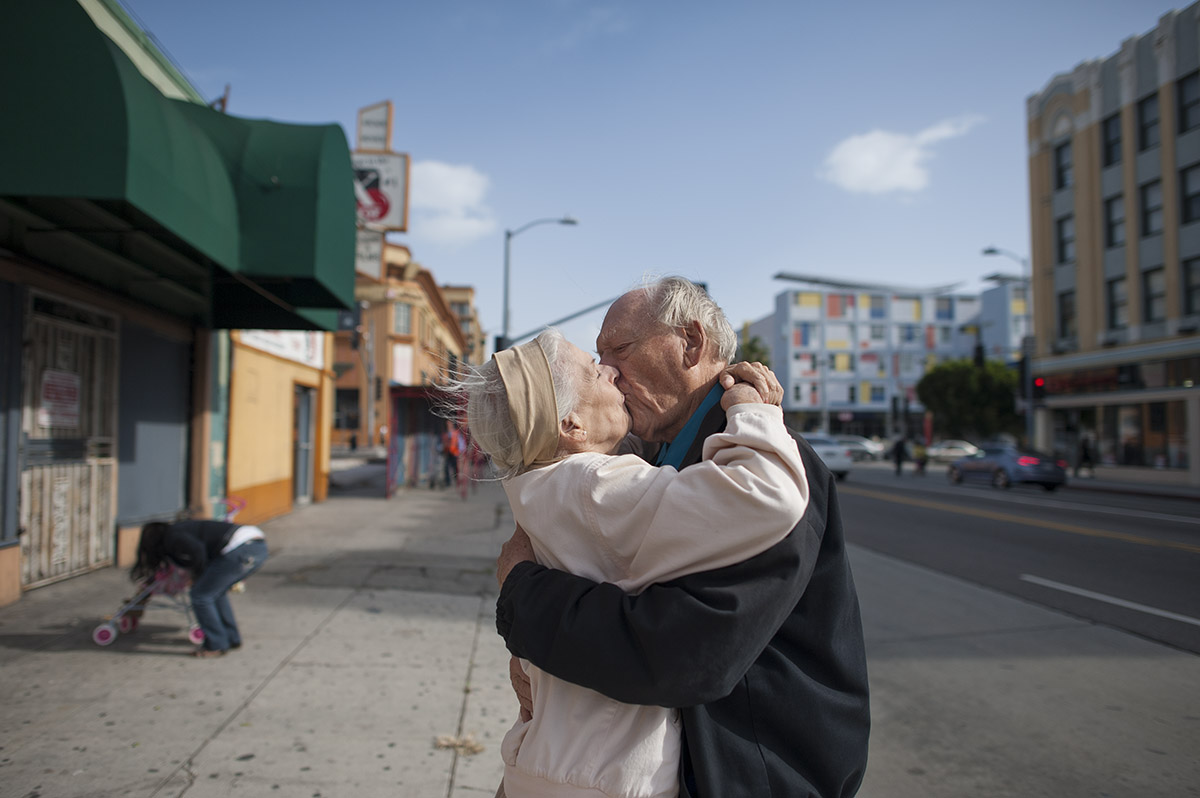 Isadora Kosofsky (US): Selections from “The Three” & “This Existence”
Inge Morath Award Recipient, 2012

“The Three,” the first section of my long-term project, documents Jeanie, 82, Will, 84, and Adina, 90, individuals bound by their relationship. They view their connection as a shield from the loneliness of aging. Even though Jeanie, Will and Adina’s relationship began at a senior care facility, the outside world is more like home. For them, the care center is a reminder of solitude. Attempting to find solace within themselves, they seek escape with each other. In describing their bond, Will shares, “We live above the law. Not outside the law, but above the law. We are not outlaws.”

Through their relationship, Jean, Will and Adina challenge socio-cultural norms projected about the elderly. Jeanie, reflecting on her life, confides, “I do not wish to assume all the garments of maturity.” Most of the women I photograph have felt marginalized as females; now Jeanie seeks empowerment, reiterating, “I want to be free.” For many of my subjects, aging is often paradoxically a form of both loss and liberation. The grief following my grandmother’s death led me to document the lives and relationships of the elderly, particularly women, in Los Angeles over the course of four years.

It appears that now, more than in prior times, there is a general consensus that the aged are becoming increasingly hidden and disenfranchised. I noticed that even towards the end of my grandmother’s life, certain family members distanced themselves from her, as if she were somehow “different” or “unimportant” now that she had aged. I feel that age is a perceived barrier and that we, too, have once, either literally or figuratively, shared their fear of isolation and their desire for human connections. Standing alone at a bus stop, Will confides, “I’ve always just missed the bus. The only time I see buses are the backs of them pulling out, leaving.” His comment confirms the fear that without others, one is alone. Even when Jeanie and Adina are not present, Will walks with his right hand outstretched and open at his side, as if he were waiting for someone to hold on.

“This Existence,” the subsequent section of my project, shadows the relationship between Rosie and her husband, Adam, as she battles cirrhosis of the liver. Rosie, married twenty years and almost twenty years older than Adam, is dependent upon him for care. Adam is one of the few individuals who does not judge Rosie, yet he tells people who ask that she suffers from cancer to avoid the stigma attached to cirrhosis. Adam explains, “With cancer, it is nothing of your doing.” In spite of certain closeness between them, Rosie is often lonely. Rosie shares, “My anxiety comes back. I’m scared. I’m lonely. I’m sick. I think what will happen later. I am very scared of my life. I very soon call to Adam or somebody.” Some assume I chose to befriend Jeanie, Will and Adina, as well as Rosie and Adam, because they appear unconventional; but, in fact, I recognize a part of myself in each individual.

When I am part of the lives of those in “The Three,” I feel I am engaging in questionable activity, in something different. Each day we searched for a new “adventure,” a purpose. I felt the comfort of being part of the group. But the thrill revealed sadness. As with both “The Three” and “This Existence,” I, too, experienced the remoteness that one can feel even when part of the group, or pair. I felt the ache that dwelled just below the surface of their romanticism. In “When You Are Old” poet W. B. Yeats writes, “How many loved your moments of glad grace, And loved your beauty with love false or true; But one…loved the pilgrim soul in you, And loved the sorrow of your changing face.” I seek to further develop my documentation, and The Inge Morath Award will permit me to do so. I wish to not only expand my existing narratives but also to document the elderly in France, a different cultural setting.

Bio:
Isadora Kosofsky is a Los Angeles-based documentary photographer. She was the recipient of the 2008 Los Angeles Spotlight Award in Photography. Her projects have received recognition from Women in Photography International, Prix de la Photographie Paris and The New York Photo Festival. Her work was recently acquired by The Philadelphia Museum of Art for their permanent collection. Isadora’s work has also been featured in TIME Lightbox and Le Monde Magazine, among others.

8 thoughts on “Isadora Kosofsky: Selections from The Three and This Existence”