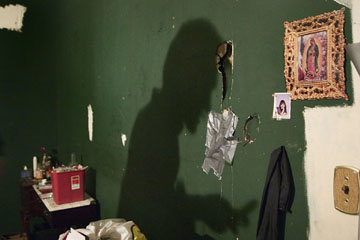 The Ninth Floor documents a group of heroin users that were living in the apartment of a former millionaire turned heroin user, Joe Smith, 63, in the flatiron district of Manhattan. Joe, the lease holder of the apartment, had allowed one of his young tricks to take a spare bedroom in his 3 bedroom apartment several years ago.

By the time that I met them in the fall of 2004, nearly 15 people were living in the apartment at a time – Joe had given up his bedroom and stayed on a dirty sofa in the living room opting to take a teaspoon of methadone, a daily bag of dope, a beer or several cigarettes in exchange for rent. Electrical cords snaked through dark hallways to fill each room with the light of one lone bulb, bookshelves and tables had been stripped of all potentially valuable items to be sold on the street to get money to feed habits, the dead cat found in the bathroom took more than 2 weeks to remove, and the people moved through the halls, past each other, wearing their addictions like chipping armor while their personalities and character remained further and further unearthed and unfed.

As the child of a former drug addict, there was something hauntingly familiar upon entering this space for the first time. I recalled the friends of my father I had been brought to as an 8 year old – the lone bulb hanging in the corner, the vacant and un-engaging grown ups, the mattresses without sheets, and the crying baby that could never seem to get the attention of the adults in the room, even when she had rolled onto the cement floor.

I have been motivated to do this work from my personal history, a concern about the destructive effects of addiction, and a commitment o make photographs that are socially relevant.

Bio:
Jessica is a graduate of The International Center of Photography’s Program in Documentary Photography and Photojournalism. Her work has appeared in Aperture, The New York Times Magazine, Newsweek, Time, Fortune, New York Magazine and Fader. For her work on heroin addicts in the Flatiron district she was awarded the F Award for Concerned Photography from Forma and Fabrica, the Inge Morath Award from Magnum, the Marty Forsher Fellowship for Documentary Photography from PDN and was awarded the Juror’s Choice Award for the Project Competition from the Santa Fe Center for Photography. Prior to persuing documentary photography Jessica worked as a public school teacher in Brooklyn, New York. Jessica is based in Brooklyn and is currently working on her first book. She is available for local or international assignments.