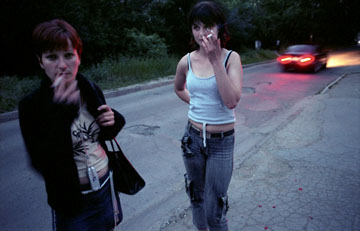 I had already begun investigating the subject in Eastern Europe, an area I’m familiar with since I grew up in communist Bulgaria and immigrated to the U.S. after its collapse. Nevertheless, the U.S. State Department estimates that each year approximately 800,000 to 900,000 people are trafficked across international borders worldwide and that “no country is immune from trafficking.” The central question of method arose: how to document and interpret a unique manifestation of a widespread phenomenon? My goal in telling these complicated stories in photo reportage is to gather information truthfully, present it in a cohesive manner that would allow a multifaceted public to react in ways that encourage a democratic and international discourse.

Examples of the multifaceted reactions by those who view my work online on sex trafficking in Eastern Europe have confirmed the power of photo reportage. In one case, a man from Tucson writes, “It is a sad truth that this outrage is a common occurrence. Not only does this travesty occur in the “former Eastern bloc,” but occurs from the Far East to the African continent and American inner cities. It is an indictment against our own self-interest and moral indifference as fellow members of the human family. Sexual exploitation and slavery is an ultimate rape of the human soul.”

Bio:
Mimi Chakarova is a lecturer at the Graduate School of Journalism where she teaches photography. She received her BFA in photography from the San Francisco Art Institute. She completed her graduate thesis in the Visual Studies Department at UC Berkeley. She has had numerous solo exhibitions of her documentary projects on South Africa, Jamaica and Cuba. She was the winner of the 2003 Dorothea Lange Fellowship, which encourages the use of photography in the scholarly work of any discipline at UC Berkeley. Her project was on documenting the daily lives of people with disabilities.