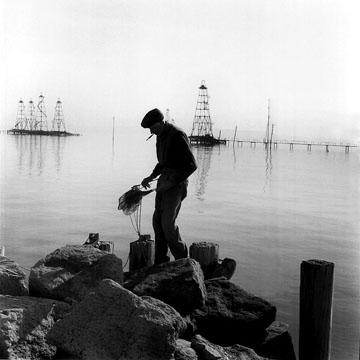 Pipe Dreams evolved from a long-term documentary project documenting my country’s post-Soviet turmoil in which I saw how corruption, poverty, and war were all related to and fed by oil and gas. Over the past two years the story has developed into a chronicle extending across three countries, through five active conflict zones, and links governments, oil corporations, and the citizens of Azerbaijan, Georgia and Turkey in an experiment not only in engineering, but manipulation of human lives.

Refugees, unemployment, ethnic and religious friction, corruption, poverty – this is the reality which surrounds the Baku-Tbilisi-Ceyhan oil pipeline. Stretching more than 1,700 kilometres, its complex route was determined by delicate maneuvering through a minefield of unresolved conflicts and competing geopolitical agendas.

Pipe Dreams is a book project dedicated to the neglected people of these three countries, linked by the pipeline and their faded hopes for a better future. The fact that they were sacrificed and suffer for their countries “greater good” is not surprising. This case though outrages me, as these populations have been hidden by glossy corporate publications and government propaganda which praise the economic benefits of the pipeline. No doubt state budgets have been increased, but at what cost to the people who live their silent lives along the pipeline?

Bio:
Rena Effendi (born 1977 in Baku, Azerbaijan) has been active as a social documentary photographer since 2002. In 2004, she was a winner of the “Fifty Crows” International Fund for Documentary Photography competition. In 2005 she participated in the World Press Photo Joop Swart Masterclass and received honourable mention in National Geographic’s “All Roads” photography competition. In 2006 Effendi was a winner of the Getty Images Editorial Photography Grant and the Giacomelli Memorial Fund award. The same year, Effendi’s work was selected for personal exhibitions at the 18th “Visa Pour l’Image” Festival of Photojournalism in Perpignan, France and at the “Les Imagiques” Festival of Photography in Bordeaux. Rena Effendi is a member of Agency.Photographer.RU. Her work has been published in Le Monde, Liberation, Le Figaro, Newsweek, International Herald Tribune, Courrier International, and Ogoniok.