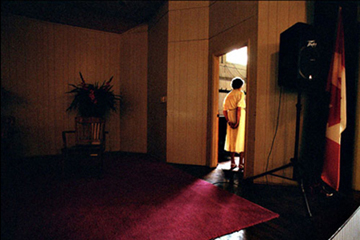 Spiritualism is a loosely organized religion based primarily on a belief in the ability to communicate with spirits of the dead. I first became aware of Spiritualism as a teenager after my cousin received a reading from a Spiritualist medium. This woman revealed a strange family secret about my grandfather’s death that proved to be true. Since then I have been deeply curious about how someone could possibly know such a thing.

I began photographing at Lily Dale, the world’s largest Spiritualist community, in 2001. Since then I have immersed myself in the history and philosophy of Spiritualism, experienced numerous spiritual healings, had more readings than I can count, took part in a myriad of circles and séances, attended a psychic college, witnessed a multitude of church services and sat in a medium’s cabinet, all with my camera. Despite this exposure, I find I am no closer to any definitive answer. It’s as if I’ve peered into a mystery.

My intention with these photographs is to document this religion’s practices and to illustrate what it means to be a Spiritualist, but also to address certain themes. They are meant as a meditation on mortality and the precarious line between life and death. They are an attempt to examine how the individual experiences God uniquely and to probe that other level of consciousness. Finally, the images are an effort to manifest the unseen and to pose the question “What if?”